Affordable Custom Welding recently completed a really cool custom fence project out in Apache Junction. Oftentimes when people hear the word “welding” they think of machine parts or car parts (which we do!) but this custom fence panel project showcases how creative you can get with metal! 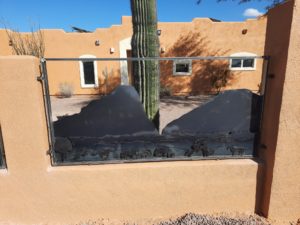 For the AJ Fence Panels, there are 11 panels total, all with some sort of southwest theme. The owner didn’t know what he wanted but knew he wanted to have something unique. We showed him some of the art pieces we’ve done and said we could blow them up to 8 feet by 4 feet to fit in the existing block wall.  The only stipulation was that the panels be southwest-themed and have a few personalized elements. We were free to get creative! We incorporate personal touches for the family as well as created panels showcasing the surrounding Arizona desert. 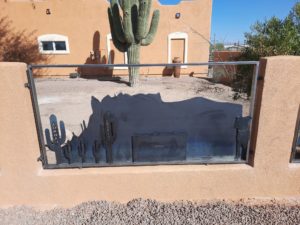 In the panel with the owner’s house, their last name is engraved above the door, the four cacti have their kids and grandkids either plasma cut or engraved, and the dog on the right is a metal cutout of a picture they sent me of their dog Duke. The Tortilla Flats panel has a Coors Lite logo engraved on one of the buildings in place of what should have been a Coke logo. The Goldfield panel has two crosses next to the church on top of the hill with the owner’s parents’ names on them, and a cutout and engraved ‘67 Ford F100, which the owner had handed down to him from his father. The A mountain panel has his son’s name and graduation date on the stadium where the stadium’s name would be. The rest of the panels were arranged in order of distance from the owner’s house, with the Four Peaks monsoon and related panels the farthest to the left, and A mountain all the way to the right.

The envy of the neighborhood 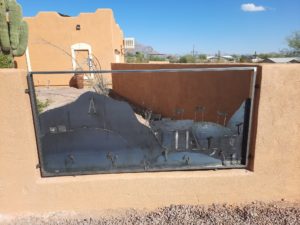 The owners were not home while the panels were being installed, but as they were being installed the neighbors kept coming over and saying how much they liked them. Unfortunately, the photos do not really do the panels justice! They were built on 1 inch by 2-inch rectangle tubes, so there wasn’t true depth in them, but there was the illusion of depth.  Way cooler than any of the single sheet plasma cut pieces out there. This custom fence panel project has been one of our favorite projects so far, and we’re looking forward to continuing with these types of custom welding projects in the future!