A customer wanted to make a unique rat rod using the cabs from two military 2.5-ton trucks. They were only ever made as a single cab, but the customer had a family and wanted a four-seater. So, the only option was to take two cabs and put them together. 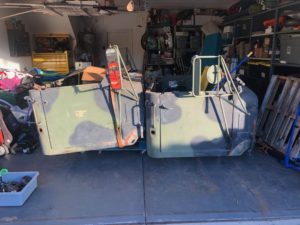 The truck cabs were slightly triangle-shaped, meaning the front of one wouldn’t simply fit up with the back of the other one.  So, the front of the back cab had to be cut and stretched to match the back of the front cab.   The cabs are also quite a large front to back and included a cowl for the original hoods.  All of which had to be removed to bring the total length of the cab to something manageable.

Once this was done, the rear cab needed to have all the cuts in the floor covered up. Since it was pretty rusty, we just cut out the old floor and installed new metal to make a new floor.  For the connection point of the two cabs, the B pillars were boxed out with heavier metal and welded together.  We also had to add bracing underneath as some of the original bracing was removed or cut during the joining process.

Time for the roof

Once the bodies were together, it was time to deal with the roof. As the roofs were also triangle-shaped they couldn’t just simply be welded together.  Since there was a good deal of custom work in this already, and no rat rod is complete without a chopped roof, that had to be addressed as well. 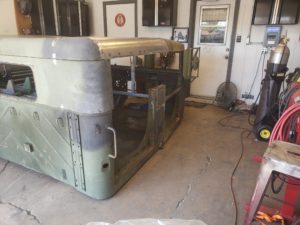 We took around 3 inches out of the front windshield frame and 2 out of the rear window frame. Once the roofline was determined, the front section of the roof was installed with the rear curved section cut off. The rear section was mounted on the back of the cabs.  From there, we built a framework to connect the two, then added a piece of sheet metal form fit over the top of the framework, making one continuous roof that looked like it was built with those bodies.

One of our favorite projects!

To our knowledge, the project has not been completed yet. But, once all the bodywork and paint is put on these cabs, it would take an expert to say, hey, these were never made as quad cabs! Anyone else would just think that’s the way it came from the factory.  This project was a lot more work than this short article makes it sound, but it was well worth it and will always be one of our favorites here at Affordable Custom Welding!