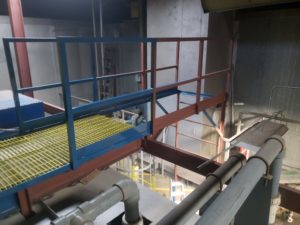 ACW recently finished a large refurbishing project at Phoenix Manufacturing (PM).  ACW worked in conjunction with Still Water Concepts, LLC. Phoenix Manufacturing is a large factory that manufactures evaporative coolers.  Part of their assembly line is a five-stage wash/prep bay which parts go through just prior to their powder coating process. This wash bay has been in operation for approximately 30 years and was at the end of its usable life.  The inside of the wash bay was very badly rusted in the final 2 sections, and the first two sections were moderately rusted.  One of the five bays was an acid wash, due to this it was made from stainless steel and not rusted.

The job at hand 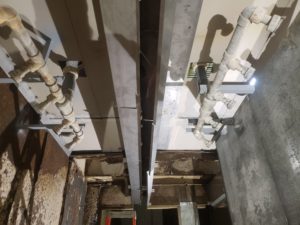 Phoenix Manufacturing received a quote from the original manufacturer of the wash bay for two new sections.  Those two new sections would have been delivered on a truck to the front door of the factory. The factory would have had to remove the two old sections and install the new ones on their own. The only way to get them into the factory would have been to remove the roof of the building, close the main street in front of their building, and crane in the new sections.  The total cost of this operation, including the two new bays, was $800,000 to $1 million. This is not counting downtime, which costs the factory approximately $12,000 per hour.

Affordable Custom Welding steps in with a solution 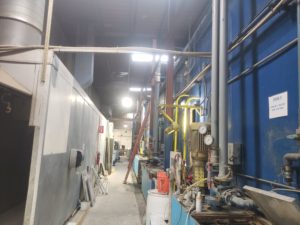 This was clearly not a viable option for PM, so something else had to be done. Because the structure of the last two bays had failed, and two of the remaining three were not far behind, the first area to address was to build a solid steel framework around the entire 110-foot wash bay.  We did this Friday through Sunday resulting in zero downtime for the factory!

The factory had a scheduled shut down the week of Thanksgiving through the following week for maintenance and inventory.  This is when the bulk of our work was to be completed.  We were originally hired just to build the structure and remove and reinstall the I Beam track the assembly line ran on.  This we had done well ahead of schedule.  PM was going to remove the roof of the two rotten sections, and reinstall custom made roof panels to fit the new roof structure with their own employees.  They were also going to remove the rusted sections of the inside of the wash bay. After a day or so, PM realized we were much better equipped to handle cutting out the roof, replacing the panels, and cutting out the bad interior sections.  All of which was accomplished on time so the factory was able to get running on schedule and for substantially less money than replacing the two sections would have cost.

The takeaways from this project 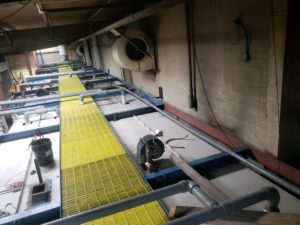 There are a couple of takeaways from this situation, the biggest is the cost savings, we were able to make the wash bay last easily another 30 years for far less than the cost and hassle of replacing sections of it. The second is, there is no replacement for skilled custom fabricators.  There is no blueprint for what we did, we were presented a problem, came up with a plan, and found a way to make that plan work. PM’s employees were used to production work and did not have the experience to efficiently and effectively remove or reinstall the roof panels or handle any of the interior parts. While we did go over the initial budget, thanks to all the additional work we did for PM, that additional work still cost less than a day of the factory being shut down beyond its scheduled maintenance period. Without us taking on the extra work the factory would have been shut down for a minimum of a week longer than anticipated, but probably more like two weeks.

Thinking of repairing or refurbishing?

If you have a situation where you think repairing and refurbishing would be more cost-effective than replacing, feel free to contact us. We are happy to come take a look and discuss options.